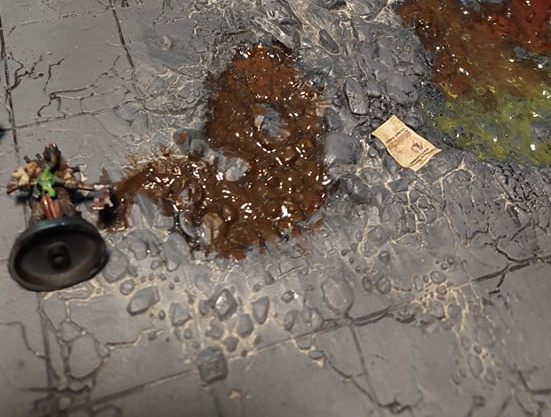 Game 6 in the campaign was a rematch vs Martin’s enforcer gang: The Necromunda Pacification Division (N.P.D). Check out the insta here: https://www.instagram.com/darkknight2k6/ . Martin was the challenger in this game and was going after my prized Archaeotech territory. Both of us had bodies out of action from the previous game. I lost so many I had to hire a couple of hangers on to fill the gaps!

The enforcers had, while still remaining small in number, gotten much hardier. Better armour all around (hello 2+ saves..), master crafted weapons, and multiple stacks of gear. They were not an easy gang to get through. I still lacked any good AP even this late in the game and knew it would be a terrible struggle to just take a single guy out. The best I knew I could probably hope for was to keep them pinned and away from me while the very strange mission took its course..

As the game goes on, a rapidly growing fungal horror would spawn and multiply from the center of the board. It would begin with a single counter on the board that had a 12″ radius of pain around it. Going into that radius would see you possible catch on fire (representing the fungal spores getting all over you). You couldn’t shoot through it due to its thickness. And if you did move into it you could no longer run, only making a single move action. Every end phase you’d roll to see if the fungal mass expanded elsewhere on the board. And you would do this for each fungal token on the board (so after a couple are down as you can imagine it would rapidly expand).

The game ends once there are 9 fungal tokens on the board or 1 gang has ran away.

Our two hobbled gangs started 12″ in from either side of the board. Both of us hid as best we could out of any line of sight. The fungal growth had already sprouted in the center of the board blocking a good chunk of sight. In a dastardly move, Martin used a tactic card right at the start to redeploy Papa Scabs, my only heavy hitter, from his 3rd story perch to the bottom corner of the map…

I had my force split into 3, a couple gangers on the left flank, 2 hired guns on the right flank, and Papa Scabs and another ganger to hold the middle. My hope was that the plants would randomly spawn on HIS side and force him to move. Martin had his guys lying in wait in cover, hoping for the same..

The two hive scum pushed up hard on the right flank fairly uncontested, staying clear of the fungal plant in the middle. Once they reached the old church shots were traded back and forth with the enforcers with no real damage occurring on either side. Hit, pin, hit pin, hit pin, never a wound! The old man with shotgun eventually managed to pop around the corner and fire into the line of enforcers, dropping Robocop and sending another enforcer broken and running away. He fell back however after due the enforcers closing in. The two of them spent the rest of the game trading shots with no real effect at all!

The left flank certainly didn’t go as well. We tried to push up but through much more open ground, while the enforcers had strong cover and a building to fire from. In a mad dash across open ground, poor Ethan was gunned down in the streets and left to bleed out. From behind him Dryh Hueave traded shots with the enforcers, managing a couple pins but no wounds. He would also be shot down later and taken out of action. Due to the mass of fungus growing on my side of the table, Papa Scabs and his buddy fled down to the left flank near the end of the game but also managed to do no damage to the enforcers.

Other than some out of actions on my side (with no serious injuries) not much else really happened. We both started running away from the quickly expanding fungus plants. They didn’t really start sprouting until around turn 5. We had our buddy Aaron over who was rolling for the plants and could not get a 5+ to save his life. Near the end we both settled on hiding and not fighting waiting for the fungus to take over and give us a draw. It took quite a few turns, again thanks to Aaron’s top tier rolling, but eventually the fungus took over and both sides fled the board.

This game was a bit of a nothing burger in the end! No real damage, no injuries, no rewards, and highly ineffective shooting! It was a fun game though and a crazy scenario. We both got fairly lucky as the plants never spawn on top of us, always seemingly landing just outside of range, or enough range for us to still run away.

In the end, thanks to the draw, I held on to my Archaeotech territory.

an independent tabletop and gaming magazine

Leadballoony - It's a lead thing